Kalix has been involved in recycling for 20+ years, and we are very proud of our success in diverting thousands of tons of recyclable material to new uses instead of taking up space in the Minot landfill. However, we are limited in what we can do as a private organization. First, many people are unable or unwilling to devote the time and effort required to sort, save, and transport recyclables themselves. Second, Kalix doesn’t have enough capacity to accept all recyclable commodities. Third, there isn’t enough revenue from sale of recyclable materials to cover the cost of curbside pickup, and some commodities don’t even bring a high enough price to cover the cost of baling and transporting. 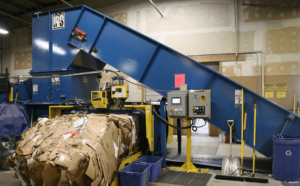 We appreciate the support that several people have expressed for Kalix Recycling, but a city curbside recycling program will do far more for the environment than is possible to accomplish with a private business. Recyclables brought in by residential customers is a relatively small part of Kalix recycling. We will adapt and evolve, and continue with selected market segments. Confidential Document Destruction, Fluorescent Bulbs, Electronics, commercial recycling – all will continue to provide job opportunities for people with disabilities. Kalix supports a city curbside recycling program as the right thing to do for the environment and the city of Minot.

The mayor has appointed an ad hoc committee, headed by City Council member Miranda Schuler, to consider a city curbside recycling program and make a proposal to the city council. The committee includes leadership from the Public Works department as well as several interested members of the community (including Borgi Beeler, CEO of Kalix).

According to John Reynolds, Sanitation Superintendent, and Jason Sorenson, Assistant Director of Public Works, implementing automated garbage collection and curbside recycling is possible in 2-3 years and may not require a significant cost increase. The plan would involve several steps:
1. The city will purchase automated collection trucks and bins for each household. The trucks have “arms” that reach out to grab and empty each bin. The specific model of truck to be purchased is not larger than current trucks, does not require any additional overhead clearance, and has long enough arms to operate near parked vehicles.
2. The city will build a transfer station for temporary storage of recyclables.
3. Two day per week garbage collection will convert to one day per week garbage collection and one day per week recyclable collection. The same trucks will be used. Each household will have two bins (different colors) – one for garbage and one for recyclables.
4. Recyclables will be stored temporarily in the transfer station and then trucked to a sorting facility in the Minneapolis area.

The plan is cost-effective because the same trucks will be used for garbage and recycling, without increasing total collection days. Savings from automation (reduced labor costs) will help pay for the transfer station and transportation to the sorting facility.

The Minot Daily News reported that a Waste Management representative told the City Council that recycling would cost each household $5/month or more. That’s true – if the city contracted with an outside vendor. But the current plan under consideration does not include any outside contracts for collection. 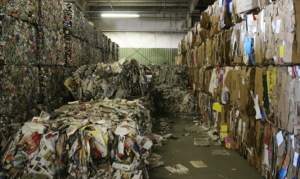 It is possible that the monthly charge for garbage service will increase. Current fees are just over $10 per household per month, which does not cover current costs of garbage collection. Although the city is looking at all options to keep the garbage rates among the lowest in the state, the monthly rate may be increased to cover the full cost of current garbage collection regardless of whether the recycling plan is implemented.

Automated garbage collection would result in some changes.
• Free bins for everybody
• Damaged bins are replaced by the city at no cost to the household
• Bins will require storage space
• The streets would look nicer on garbage day with all garbage contained in bins
• Problems related to garbage being dispersed by wind or animals will be eliminated
• Garbage too large for a bin will require a special request for pickup, and there may be an additional charge
• Bins may be difficult for some people to move to the curb

The city is still considering some of the barriers and possible solutions.

Curbside recycling is a great step in reducing landfill use, but it is only a first step. According to information shared by Jason Sorenson, city pickup of residential garbage accounts for less than a fourth of current additions to the landfill. The remainder comes from other haulers – nearby communities, local commercial accounts, and multi-family housing. Making major reductions to landfill accumulations will require addressing other sources of garbage.

The City of Minot has scheduled a public meeting for 6:30 May 9th at the Auditorium. Please attend for more information and an opportunity to provide feedback.