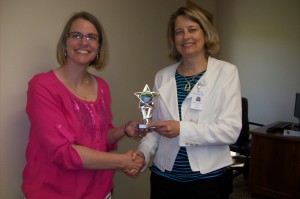 Kalix (formally known as Minot Vocational Workshop) annually celebrates Earth Day by offering specials for those wishing to turn their trash into cash!  Americans buy 28 billion bottles of water annually and 70-80% of those bottles end up in landfills.  The Recycling Center celebrates Earth Day to spread the message about the importance of recycling.

This year, Kalix gave Minot residents the opportunity to donate tokens/cash earned from recycling to the school of their choice during the month of April.  Thirteen schools received donations from community members.  Dakota Elementary received the most donated tokens and was presented with a traveling trophy in honor of their commitment to saving the earth.

Kalix encourages the citizens of Minot to recycle items such as aluminum beverage cans, Plastic #1 PET and #2 HDPE, newspaper, magazines, catalogues, office paper, tin or steel food cans, corrugated cardboard and hard or soft covered books.  Do your part for the earth by collecting and bringing in your recyclables throughout the year!