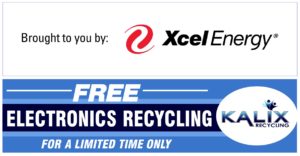 The Kalix Recycling Center announces a one-day special event: Free E-Recycling Sponsored by Xcel Energy! The event will take place in the Slumberland parking lot on South Broadway on Thursday October 5th from 10am – 4pm (or whenever the funding runs out)! Electronics recycling comes at a price, but Xcel Energy is paying the cost for area households to recycle one monitor, one printer, and up to 25 pounds of general electronics per household. Additional items will be accepted at regular prices.

Regular fees are $.25/pound for most electronics, $.45/pound for printers & copiers, $10 each for flat panel monitors, and $30 each for CRT monitors.

Recycling is really about conservation: the purpose is to conserve natural resources, energy, and landfill space. With electronics, an important fourth reason emerges: to keep hazardous substances from contaminating the landfill.

According to the EPA, “Americans generated 3.36 million tons of obsolete electronic products in 2014” and electronics is the fastest growing segment of the waste stream. Circuit boards contain raw materials such as gold and copper. Recycling a million cell phones yields 35 thousand pounds of copper, 772 pounds of silver, 75 pounds of gold and 33 pounds of palladium. Recycling also saves the energy used to mine and manufacture the re-purposed elements. Recycling one million laptops saves the energy equivalent to the electricity used by 3,657 U.S. homes in a year. Computer monitors and televisions with cathode ray tubes also contain lead, which is considered hazardous to the environment.

As part of the affiliation with CyclePoint, Kalix is working with GreenEyes Consulting to become R2/RIOS certified. R2 is the leading standard for electronic repair and recycling. Recycling Industry Operating Standard (RIOS) is an integrated Quality, Environmental, Health and Safety Management System Certification designed for recycling.

Since opening the doors in 1994, The Kalix Recycling Center has diverted over 51,000 tons of recyclable materials away from the landfill and into re-manufacturing. In the last ten years, Kalix has also collected and transported 171,000 pounds of electronics for decomposition into raw materials, primarily from local businesses.